Prevention Of Vitiligo On The Skin 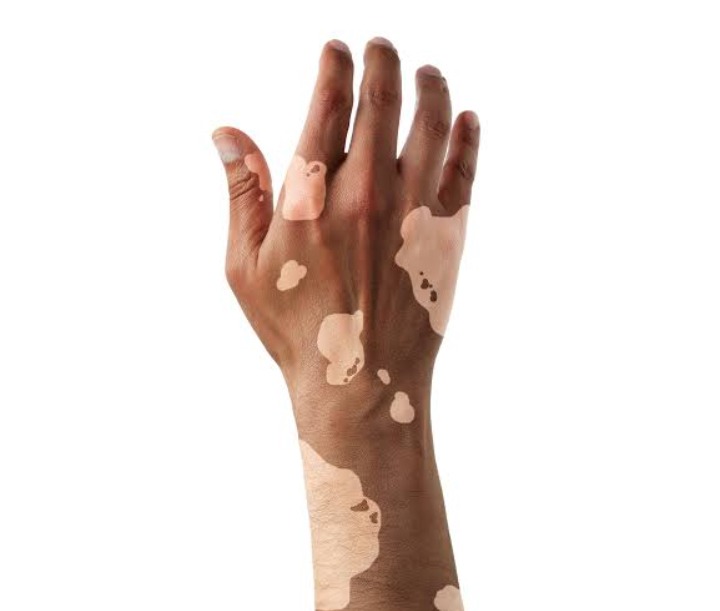 Vitiligo is a skin pigmentation disorder that results in white or bright areas on the body. When the cells that give

color to the skin, hair, and eyes quit working, discoloration ensues. Experts believe that vitiligo can be caused by a

mix of causes, including heredity, autoimmune, stress, skin injury, and chemical exposure. However, Vitiligo is a

skin condition that affects people of various races and skin types. Vitiligo can arise at any age, but it is more common

before the age of 30. It can affect nearly all types of skin, depending on the form of vitiligo you have. While the actual

explanation is uncertain, research indicates that a number of factors are known to increase the risk.

There is a significant connection between vitiligo and other autoimmune illnesses, including those that affect the

thyroid gland, according to studies. Vitiligo is more likely to occur in those who already have an autoimmune

Stress, a terrible sunburn, skin trauma, or exposure to a powerful chemical appear to trigger the development of

vitiligo in persons who are genetically prone to the disorder.

According to researchers, variations in over 30 genes have been related to an increased chance of developing vitiligo.

Genes such as the NLRP1 gene and PTPN22 gene are thought to play a role in vitiligo development.

According to research, vitiligo is more prone to develop in locations where there has been a lot of sun exposure and

severe sunburns (commonly on the face, neck, and hands). Trauma to the skin, such as a deep cut or frequent

progression of vitiligo, particularly in patients who are genetically predisposed to the condition. 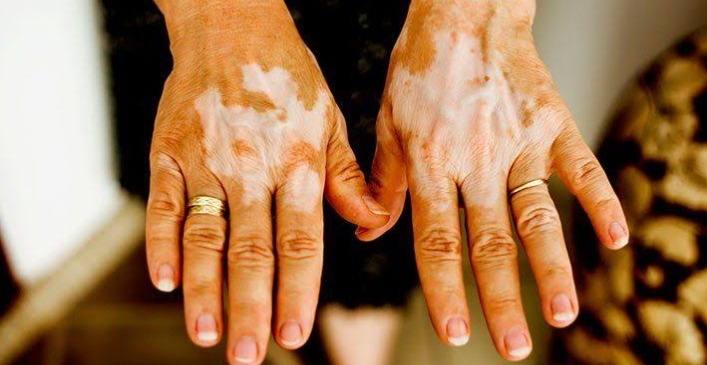 The skin changes are thought to be triggered, at least in part, by hormonal changes that occur when a person is under

a lot of stress. Trauma and substantial life stressors have also been connected to autoimmune illness, according to

Vitiligo is a type of skin deterioration brought on by chemical exposure. According to scientists at the University of

Florida’s School of Dermatology, exposure or hereditary effects may raise cellular stress in melanocytes or reduce the

stress threshold that the immune system can sustain.

Chemicals commonly found in adhesives, disinfectants, paints, pesticides, and other items may play a role in the

development of vitiligo. Monobenzone, which is present in rubber, leather, and cosmetic colors, is one of the

compounds that has been studied.

Apart from the loss of skin color, there are other signs you can notice such as;

• A premature white hair can occur in the area where there is a loss of pigment, including the hair on the scalp,

• The affected areas can burn more easily after sun exposure, causing pain, itching, blistering, and swelling of the

• You may experience occasional pain, such as soreness, itchiness, or irritation of the skin in the affected areas.

Physical Ways You Can Prevent Vitiligo From Spreading.

According to the mayo clinic, there few tips you can follow that may help you care for your skin and improve its

Vitiligo is a reddish-brown color that appears on parts of the body that are exposed to the sun. If you have vitiligo, it

might be assumed that it is caused by the sun’s harmful ultraviolet rays (UV). As a precaution, apply sunscreen to all

exposed areas of your body.

Clothing, of course, protects you from the sun, especially if you wear particular textiles (such as denim). Wear long

sleeves, especially light-colored ones are less effective at keeping the sun out.

• Avoid getting a tattoo. Vitiligo can occur within two weeks if your skin has been damaged by a tattoo. As a result,

stay away from getting a tattoo.

What The Color Of Your Urine Says About Your Health State

The Healthy Benefits Of Farting