Symptoms You Need To Know

Not all cases of STD are symptomatic, when people develop symptoms, it can be mistaken for another condition such

as a urinary tract infection or a yeast infection. If your intimate life is very active and you feel something is off, what

you feel could be an STD symptom.

In this article, We will be sharing with you some STD symptoms you should be concerned about. However, having

any of these symptoms does not automatically mean you have an STD but it raises the possibility. 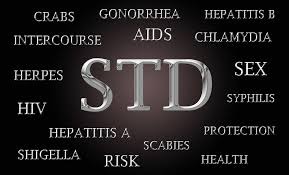 1. If you feel pain when you pee, it could be as a result of an STD. The pain comes from inflammation in your urinary

tract. Bacteria can cling to the mucus membrane of your urethra, which causes this inflammation.

STDs such as gonorrhea and chlamydia can cause burning sensations when you pee.

2. A good number of us pretty much know what is normal and what is not when we discharge. If things look odd

down there, it could be due to STDs like trichomoniasis, Chlamydia, and gonorrhea. This is caused by inflammation.

The bacteria can cling to your reproductive tract, which causes irritation and unusual discharge.

3. Women who experience burns or itches in their private part may have a yeast infection, but STDs such as

gonorrhea and chlamydia can also cause those symptoms.

4. For men, when you have bumps on your genitals, it can be a sign of an STD, including syphilis and genital herpes.

If you develop a bump or sore, do not write it off, even if it goes away after a few days.

5. You should pay close attention to pelvic pain. Chlamydia and gonorrhea are known to cause these symptoms.

to the uterus and fallopian tubes.

NOTE: STDs like Chlamydia start to show symptoms several weeks after you are infected. While gonorrhea may

STD symptoms can show up in the genitals, but symptoms can also appear all over the body, anywhere near and far

from the site of infection. There are situations in which STDs like gonorrhea can lead to rheumatoid symptoms in the

joints and syphilis can also infect the brain to cause symptoms.

Symptoms Of Low Back Pain, Waist Pain And Prevention